Take Me Out To The Ball Game. 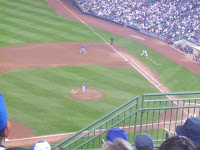 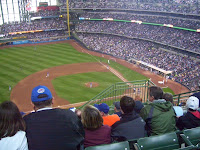 Sunday I got to see a professional baseball game for the second time in my life. The first was when I was in grade school. My family took a trip to Chicago and my mother an avid fan took me and I am not sure if my sister went or not. We went down to the park on the El. The Yankees played a sox team, not sure if it was red or white. Mickey Mantle hit many home runs, and although I should have been cheering for the Chicago team I liked Mickey Mantle.
This time I was asked to go by my daughter-in law. The whole family was there except Dr John. We sat up high,and I was lucky because the people who had the seats down two rows and to my right did not show up so I could see the batters. Unlike my first game there were not a lot of hits by anyone. The Cubs won. We sat in a row so it was hard to just talk, but we walked out to the parking lot together.
Another difference between the first game and the second was the stadium. The first game did not have the high teck.
The hardest part was getting to the stadium. We used Map Quest and as we got closer to the stadium the map did not follow the instruction we were getting on the signs. We stuck to the map and it got us there and back up North. It was a good time.
Posted by bettygram at 9:09 PM

How wonderful Betty. I've been to a couple of MLB games myself and they are great fun to go to. Glad that Map Quest worked so good for ya and so glad you had a great time. Aloha :)

I've been to several Orioles games in my life! I LOVE watching ball at the ball park - because honestly, even from waaaaaaaay up high, you still get to see EVERYTHING that happens! I love it! I'm so glad you had a good time! And by the way - IF I had the opportunity to see Mickey Mantle play... I would have rooted for him too! UNLESS he was playing against Cal Ripken Jr.! LOL! (i guess that was not likely to happen, huh?)

What fun! I have never been to a pro-ball game of any kind. I bet the excitement is contagious.

Glad you had a good time. Mickey Mantle was my childhood hero. I have noticed that MapQuest is not always correct. I've been to see the Houston Astros a few times and I really enjoy going -- so much to see that you don't see on tv.

It must be Spring if you went to a baseball game.