I felt happy today when we finished working on the train layout. On Friday we began with getting the logging car to dump it's logs. We felt good about that. Next we started to move the transformers to the new table and the animated pieces stopped. I felt so bad because until that happened I couldn't wait for daughter to come home to show off. In trying to get things back working we had to cut through the scenery to find the burned out transformers. We did get all but the skating rink working. We got a new transformer but couldn't find the right size end. Today John spliced the old end on the new transformer and we got the lights and music but the skaters still don't move but we have two other skating rinks so we will let the skaters just stand on the rink. Then we ran everything. We had two trains moving and two trolleys and all the animated items working.

I felt so bad on Friday that John sent me roses. Beautiful red and yellow roses.

I want also to thank Kristin for the pictures I have been getting of Samuel.
Posted by bettygram at 9:50 PM 4 comments:

Today I try another shot at Raven's Challenge.

Week's Ten Word Challenge : build-a-bear workshop, man bites dog, opulent, disparaging, lipstick stain, preponderance, smoky quartz, clothes pin, meticulous, falling leaves
Outside of the counselors office, alien Mark felt ashamed. He knew how upset Dr Peterson was, why did he have to make it worse with the cutting of the paper into a necklace. He shifted into human form, and was walking down the hallway when Eric approached him. Eric is Dr Peterson's son and a fellow assistant to his father.

"How did the exploration go?" asked Eric

"Not very well. Your father had a panic attack and we cut the research project short."

Mark restrained himself from making any disparaging words about Dr Peterson.

"let's go to your room and I will fill you in on the details."

Eric's room was not opulent. It was fill with items that were called collections. Meticulous care was given to the items. There was a bear made at the build a bear workshop on earth centuries ago and handed down to Eric. It did show a lipstick stain from some grateful relative. The bear was sitting on shelving and next to it was a small bear of smoky quartz. There were hanging on a string and held by a clothes pin colored leaves. They were arranged to look like falling leaves. In Marks eyes the preponderance of items of Earth, showed a longing of the Petersons to go to their home planet. Mark was filled with envy. He had never seen his own home planet. The only information he had was from the Petersons and they were filled with hate having anything to do with the Zonics. Mark picked up the bear turning his back to Eric, and then he quickly turned around. "Put the bear back" demanded Eric. "Why, are you afraid I will do this." The bear exploded into many pieces. Eric leaped at Mark to get what was left of the torn bear. This was a man bites dog event . Eric could have been in the same shape as the bear and just as quickly. Eric knew this because he had accidentally walked in on Mark as a blue glowing globe, when they were much younger. Eric kept the knowledge from his father feeling that was the safe thing to do. Eric found much to his surprise that he grabbed a intact bear. The torn bear was a fabrication of Mark. "You are such a Zonic, "said Eric. Mark laughed , not a Zonic reaction. Mark then began to inform Eric about the research.

As Sandy Shore left the store ,she heard the flip-flop of the penguin behind her. She got into her car, and the penguin got into the passenger's seat. Sandy was getting more and more upset. Sandy got out of her purse a moisturizing cream with chopped pickles as an ingredient, after putting on her seat belt. She slowly put on the cream. She was hoping that the cream would calm her. Then she turned to the penguin and said, "on to Chicago."

Here is my story for the ten word challenge.


Mark ,the assistant, watched the blinking lights move about in the tall grass,as he and his professor explored this area of the planet. Next to him, Dr Peterson also watched the movement of the lights. His breathing became labored. Mark knew that Dr Peterson ,a research biologist, was having a panic attack. His fear came from his capture and imprisonment sixteen years ago by Zonics. Dr. Peterson and crew were human and stood no chance against the Zonics. The Zonics were Chrystal like balls,who could destroy their enemies with a number of abilities. The lights were not Zonics. Mark was not sure what they were, but they looked like giant fireflies. The Zonics also glowed but it was a continues light.That fact Dr. Peterson must have forgotten.Not wanting Dr Peterson to continue suffering , Mark suggested that they return to the space ship, and abandon the project on this planet. Wanting to leave the area as they had found it, Mark worked at making everything fit back in their shuttle leaving the area ship-shape . He was an excellent packer. Their spacesuits were cumbersome but essential for Dr. Peterson ,not for Mark who was not human. This fact was not know by Dr. Peterson, and Mark had been his assistant for the last year. Mark was a Zonic and one of their abilities was shape-shifting.

Back on the ship, Dr Peterson contacted the ships counselor Sandy Fitz. An attractive young officer, the doctor imagined she had little cellulite on her. The office had a wind chime made of crescent shapes from scrap metal. The shapes were familiar, but he couldn't think of where he had seen them before. They looked like the crescent moon but there were patterns in each one. The counselor gave Dr Peterson an exercise using homonyms, hoping to relieve his stress. Dr. Peterson stared at the scissors on the desk before him. They appeared to be rising up and were cutting a sheet of paper. The paper was cut into a necklace with crescent shapes like those on the wind chime. A shining dark blue globe appeared in the room visible only to Sandy Fitz, because it was behind Dr Peterson. Dr Fitz knew that it was Mark, for she had raised him. She shook her head at him and Mark left. Dr. Peterson thought the shake of the head was for him. The scissors and necklace were gone. Dr Peterson made another appointment, for he had a long way to go to be healthy.

Sandy Shore,a petite woman, was in the store where they were selling TV's. Suddenly the TV's playing became full of static. She looked around for a clerk , and she saw a penquin in a cinnamon colored floppy hat. Now she really needed a clerk. She found him behind a counter putting sales slips in alphabetical order. He egnored her ranting about the TV's and a penquin. Gary, who had his name on his name tag, did not want to hear about non working TV's or penquins in the store. Finally she got tired of being egnored and left the store. The penquin, with the floppy hat followed her out.
Posted by bettygram at 3:17 AM 9 comments:

Today is Fun Monday and the idea is to start with a red nine and then doodle. This is my doodle.

Done in center of page self centered.
eyes alluring, That would be nice.
Faces by adolescent girls seeking to produce an idealised self portrait. I am close to seventy maybe a second childhood I am seeking.
right to left logic
Comic faces usually drawn by men indicating a desire to be center of attention, There it is again I want to be the center of attention. But i am not a man. 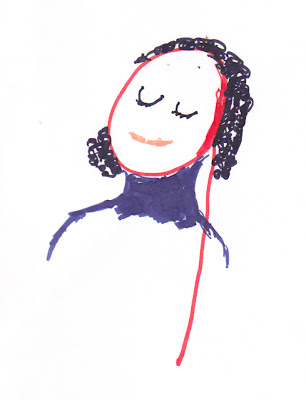 I look at John

1. He’s sitting in front of the TV; what is on the screen? House or Monk

2. You’re out to eat; what kind of dressing does he get on his salad?None

3. What’s one food he doesn’t like?Tomatoes

4. You go out to the bar. What does he order? Diet Pepsie or coke

5. Where did he go to high school?Ishpeming

7. If he was to collect anything, what would it be?Dragons and trains

8. What is his favorite type of sandwich?Ham and jam

9. What would this person eat every day if he could?Steak

10. What is his favorite cereal?Rice Krispies

11. What would he never wear?(anything stylish...)

12. What is his favorite sports team?Packers

14. Who is his best friend?God and me

15. What is something you do that he wishes you wouldn’t do?fuss

16. How many states has he lived in?three

17. What is his heritage?English and Finish

18. You bake him a cake for his birthday; what kind of cake?Chocolate

19. Did he play sports in high school?No

20. What could he spend hours doing?Running trains and blogging
Posted by bettygram at 2:14 PM 3 comments: